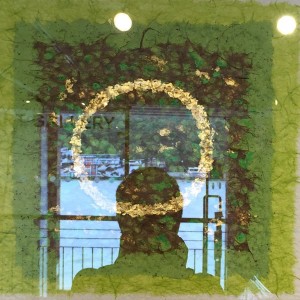 For three weeks in June/ July 2015 I was the Featured Artist at Skylark Galleries 2, which is in the Oxo Tower overlooking the Thames. In the picture above you can see me and the river reflected in  the glass of “Woodland Ring” , one of the large textured pieces I had on show for the last two weeks. 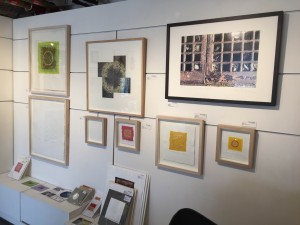 It was a busy time for me with two other shows going on at the same time! So for the first week I decided to show an interesting mix of old textural photographs alongside some newer pieces. Above right you can see “Russell Squares” which echoes the squares in “Surrender” and in several other of my white embossed works. In the centre is “Circle of Life”  a collage of four photos of the same curve which together form a textured circle.

The Private View was great fun with lots of jolly visitors, we were so busy we forgot to take photos of the merry throng. So I just have these two to share, which are rather fun! 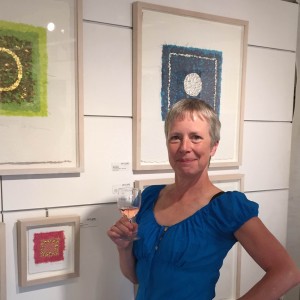 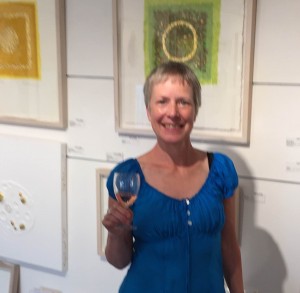 . . . and in the window I placed my large textured painting “Above and Beyond” and a set of “The Four Seasons”, which I think complemented one another nicely.

You can find out more about which cookies we are using or switch them off in settings.

This website uses cookies so that we can provide you with the best user experience possible. Cookie information is stored in your browser and performs functions such as recognising you when you return to our website and helping our team to understand which sections of the website you find most interesting and useful.

You can adjust all of your cookie settings by navigating the tabs on the left hand side.

Strictly Necessary Cookie should be enabled at all times so that we can save your preferences for cookie settings.

If you disable this cookie, we will not be able to save your preferences. This means that every time you visit this website you will need to enable or disable cookies again.