Gill has been meditating daily since 1997. Initially this was for health reasons, now it is just part of her daily routine. Gill feels that it helps her to stay healthy, calm, focused and full of energy, and thus able to cope with all the different facets of her busy life. Since 2008 Gill has been facilitating Meditation sessions in South East London.

“Thank you so much for giving your time this year to introduce me to Qigong.  I have thoroughly enjoyed learning the movements and look forward to your weekly sessions which provide a lovely calm focused hour each week in what has been an otherwise very stressful year”. Sue R.

“Thank you again for guiding and sharing your knowledge, energy and celebration of such a soul enriching practice! I am finding it so beneficial & therapeutic in far reaching ways” Graeme

“Gill’s meditation classes are wonderful, They allow you to focus, to breathe and to relax. So important in this busy world. I highly recommend them” N.S. Brockley

This page includes information on;

Gill leads weekly classes at the Sunflower Centre, Brockley. The sessions last about 50mins, starting with some gentle stretches, a short sitting meditation based on mindfulness practice followed by a 15 – 20 minute guided visualisation. You can sit or lie down for the visualisation. Gill gently guides participants to use their breath to relax the body & mind, release tension and connect with the beauty of nature. This can promote a deep sense of well being which, Gill believes, can support the body’s natural healing processes.

Classes are on-going. Participants can pay for one class at a time or book in blocks of 5 consecutive classes.

5 classes in a row cost £50 payable in advance

The classes are held on Wednesday mornings at 10am

Please bring something to keep yourself warm & comfortable..

To check dates, book a place or for more information please contact Gill at gill@gillhickman.com

See the Brockley class above for a description of what to expect. The evening classes tend to fill up so it’s best to book well in advance.

5 classes in a row cost £50 payable in advance

Please bring something to keep yourself warm & comfortable.

To check dates, book a place or for more information please contact Gill at gill@gillhickman.com

Check out the Goose Green Clinic website at www.goosegreenclinic.net

MEDITATION FOR HEALTH – ONE TO ONE SESSIONS

One-to-one sessions can be very helpful for people facing specific health conditions who wish to use visualisation as part of their continuing health-care programme. In these sessions Gill will work with you to tailor-make a personally effective visualisation through a process of co-creation.

These sessions cost from £40 depending on location. Concessions are available

To discuss a possible session please contact Gill at gill@gillhickman.com

HAPPY CELLS PAINTINGS
The first Happy Cell painting arrived apparently “out of the blue” in May 2006.

Inner Worlds was Gill’s first “Happy Cells” painting, made in 2006

It’s title was clearly “My Happy Cells” and it took Gill completely by surprise. (It since changed it’s name to “Inner Worlds”) Until then almost every piece she had created was on a square format. All the embossed series’s; Seasons, the White series and the Chinese Elements series, 2000 (except Earth) are square or rectangular. However, Gill had been “visualising” healthy cells in her daily meditations since 1998, as part of her positive approach to her serious diagnosis in 1989. 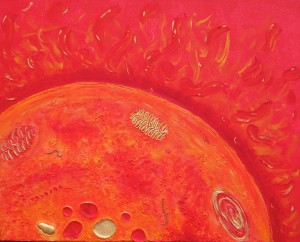 Other Happy Cells paintings followed, and at her solo show at St Georges Hospital London in  Sept 2006 , a doctor pointed out aspects of cells that Gill didn’t consciously know she was painting

“That’s the mitochondria” he said “but I’ve never seen a gold one before!”

Mitochondria are the power centres of cells, and now feature prominently in all Gill’s cell paintings. 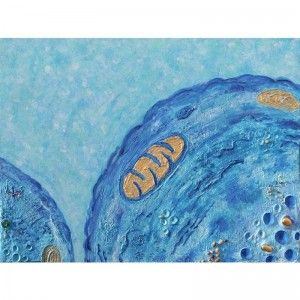 Blue Cells in Conversation I – The mitochondria “looks like a bread roll” a small child told Gill!!

The cell paintings above and other more recent artworks are all for sale from the Skylark Galleries website. All prices are negotiable, so contact Gill if interested.

You can find out more about which cookies we are using or switch them off in settings.

This website uses cookies so that we can provide you with the best user experience possible. Cookie information is stored in your browser and performs functions such as recognising you when you return to our website and helping our team to understand which sections of the website you find most interesting and useful.

You can adjust all of your cookie settings by navigating the tabs on the left hand side.

Strictly Necessary Cookie should be enabled at all times so that we can save your preferences for cookie settings.

If you disable this cookie, we will not be able to save your preferences. This means that every time you visit this website you will need to enable or disable cookies again.